It’s September, a time when many leaders launch new projects and initiatives. Leaders tend to think that their organization needs to do more and do it faster to succeed in today’s world.

I hear leaders talking about how they can’t slow down the pace of change. They talk about needing to implement all the changes and get all of them done quickly.

I have also previously bought into the more and faster is better myth. It might be not taking adequate breaks or time off to recharge my battery. Sometimes I have agreed to one more project because I don’t want to miss an opportunity or believe it is too important not to get it done.

But, slowing down, doing less and more focused work, and holistically approaching change is what leads to a healthy solid, high performance, and change-ready organization. I have talked before about the importance of pausing during change. Pausing, slowing down is also essential to avoid falling into the acceleration trap.

It’s easier than leaders think to fall into the trap of acceleration. And once there, it can be challenging to get out.

Falling into the acceleration trap usually happens when leaders, in an attempt to deal with the external or internal pressures, increase the number, speed and intensity of the projects and activities. The organization is thrown into a constant state of change, and employees are expected to do more, often with less and faster.

Emma Seppala, the author of The Happiness Track, notes we pay a high price when we buy into the myth that success requires doing more, always looking to the next thing, and persevering at all costs. Leaders burn themselves out and often drive their employees to the same fate.

Increasing the number and speed of initiatives in the organization, asking employees to do more in less time, working longer hours, and expending large bursts of energy to complete a project, resolve a problem or meet a goal is sometimes needed. And these short bursts and added pressure can work. Employees rise to the occasion and help you land that big client or get that new technology implemented. But that’s when leaders can get lulled into the acceleration trap.

Leaders who believe the increased pressure and pace are needed for continued success attempt to make it the new normal.

The result is the organization is thrown into a chronic state of overload, which is not sustainable long term.

Recognizing When You Are in The Acceleration Trap

I was excited when I found Heike Bruch and Jochen Menge’s work on the acceleration trap. Having seen the scenario they describe play out with organizational change for over a decade but I never could name it.

Employees are overloaded with one change initiative after another or worse, several simultaneously. Leaders confuse initiating and implementing change with adoption. The result is a decrease in organizational capacity for change, and the ensuing change fatigue creates burned-out change-cynical employees who learn to fear change. 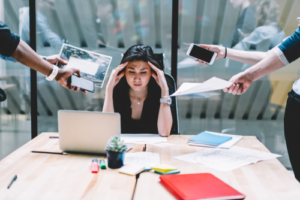 Before leaders can get out of the acceleration trap, they need to recognize when they have fallen into the trap. Heike Bruch and Jochen Menges found three patterns that signal an over-accelerated organization.

“Employees can handle overloading and multiloading for short periods, but when there is no end in sight, employees feel imprisoned by the debilitating frenzy.”

It is possible to release your organization from the acceleration trap, enable multiple changes and prevent change fatigue. No one should be tasked with doing more with less for extended periods. Expecting people to do more with less is not the same as streamlining a process or adopting LEAN practices.

To maintain a healthy change-ready culture, leaders need to respect their employees, take a step back and ask; Have we fallen into the acceleration trap?