The Invisible Impact of Your Culture

However, on this trip I was flying with two different airline companies. Having heard the same announcement on a different airline just an hour earlier, something caught my attention. What I noticed was that although the words were almost identical on both airlines – the feeling and response of the passengers was different. And that difference was felt through the entire duration of each flight. 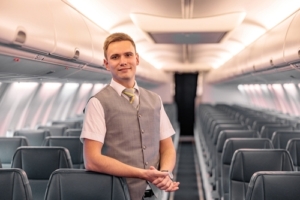 The difference I was feeling was culture. There appeared to be a stark difference between the culture of each airline. And that difference also seemed to infuse every aspect of the flight. From that initial safety message to the way our service was delivered to our exit off the plane.

I can’t say one airline’s culture was better than the other. But I can say I felt different.

That’s the power of culture.

Culture Transcends What You See

Dr. Katharina Kettner, a colleague and one of our alliance partners, says it’s helpful to think of culture like an iceberg. There is a portion that you can see above the waterline. But there is a larger, more important, and invisible side of culture you must account for to understand how it is driving your organization.

It’s easy when thinking about culture or wanting to change your organizational culture to only focus on the aspects above the waterline. That’s because these aspects are concrete and easy to recognize. For the airlines it was their uniforms, onboarding behaviours, policies, posted values, the safety demonstration, and other artifacts.

On the surface, each airline looked almost identical—their uniforms were similar, as was the in-flight service and even the words they used. The difference I felt in each airline determined my experience and shaped my opinion was due to the invisible portion of each airline’s culture. The unconscious beliefs they held about the passengers, each other, and the way they approached their work.

All the staff on each airline were professional and responsive to the needs of the passengers. Yet on one, I felt relaxed. It seemed friendly, and everything felt more casual.  It was like I had been invited to take a trip on a friend’s plane. On the other airline, I felt comfortable. It seemed structured; everyone, including the passengers, had a role so we could reach our destination.

That’s why it’s so important when embarking on culture change to make the time and space to understand both the visible and invisible elements of your culture. It’s also why training people to do something different is not enough.

Assess the Invisible to Get Real Culture Change

If you don’t understand and address the underlying beliefs of your culture, you won’t know what is really driving the way your organization works. And any changes you make, any new skills or training to do things differently, won’t stick.

Transforming your organization’s culture is not a quick fix and should not be taken lightly. Edgar Schein, professor emeritus at MIT, notes that culture is the most stable part of the organization, making it challenging to change.

That’s why you need to undertake any culture change thoughtfully and with a readiness mindset. A Readiness Mindset can help you avoid one common mistake of organizational transformation.

How a Readiness Mindset Helps Create and Sustain Culture Change

The visible aspects of your organization’s culture are easier to see and measure, making them easier to change.  So, it’s not surprising that you focus most of your energy, time, and resources on the visible elements of your culture. I see this with rebranding. When organizations look to begin transforming their culture, they’ll start with a rebrand. Rebranding is valuable, and it can be a helpful step in your cultural transformation. But rebranding won’t change your culture.

To get real and sustainable cultural change you must assess and understand, the unwritten, unconscious beliefs and rules that drive the behaviours and activities.

I recall one organization that, as part of its transformation, espoused the value of teamwork and collaboration. Yet, despite lots of workshops, training, rebranding and renaming the company there was still a culture of “us (the C-suite) and them (the employees).” The executive team was frustrated and concluded their employees were resistant to change. Unfortunately, labelling the employees as resistant only exacerbated the problem.

The issue wasn’t that people were resistant to change. The problem was a low level of readiness. Because below the surface lingered unresolved resentment about a previous merger. There was a belief and unwritten rule that the CEO didn’t like to hear when things weren’t going well or in conflict. There was also a fear of being called out if you were wrong.

It wasn’t until these underlying beliefs were brought to the surface that people could truly begin transforming the organization to the new desired culture.

When you decide to embark on cultural change, send us a message. We’d be happy to help.