Let me tell you a story about a client I worked with.

Recent shifts in the market and new competition had led the company to initiate a series of changes in its senior management team. They needed a team with different skills and diverse thinking. The CEO knew they needed to transform the business. The marketing director was promoted to COO. To fill new positions that were created on the senior team, they hired from outside rather than promoting from within. The thinking was to bring fresh ideas and approaches into the company.

The existing senior leaders and new leaders were eager to contribute to help shape the company’s transformation. They knew they needed to develop new ways of working throughout the company. The leaders wanted to tap into the diversity of thought, share new ideas, and capture the employee’s collective intelligence. 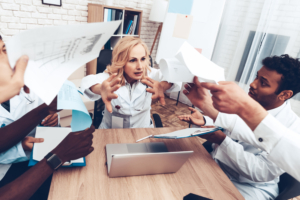 However, the changes were stalling out. This new team became bogged down with high levels of conflict. Every meeting began to feel like a battle.

They brought me in to help resolve the conflict and help the leaders and employees move forward with the transformation.

I was asked to help them create a working environment that enabled them and the employees to quickly identify and adopt new ways of working individually and together. They needed to work with the different working styles and explore multiple perspectives without creating conflict.

Conflict in the Workplace

The first thing I told them was that conflict during change is not unusual, but unproductive workplace conflict can be a serious problem.

Research has found that unresolved workplace conflict causes problems for organizations. In one global study, 67% of employees stated they had gone out of their way to avoid a colleague due to a workplace disagreement, and 14% said that they missed a day of work to prevent a workplace conflict.[i]

For this company, the conflict was causing a serious problem. Productivity was affected and people had stopped actively participating in team meetings. Others thought it was best to stay silent on issues to help prevent any more conflict from arising.

The CEO was concerned because the conflict had started to spill into the departments, and everyone believed it was inhibiting the company’s growth.

The good news was every team member was committed to finding a solution. It was my role, to help them find the solution.

Given the amount of change required for the transformation, they wanted a solution that would enable them to debate, challenge each other’s assumptions, even disagree and explore alternatives without creating unproductive conflict. In essence, they wanted to capture the energy of conflict without the adverse side effects.

Vision is Not Enough

The challenge for this team and any team when addressing conflict was to identify the root cause. That’s not easy because conflict is grounded in our perception. Conflict arises when one person or group believes another person or group is thwarting their efforts or desired objectives, whether the other group intended to do so.[1]

Therefore, getting to the root cause required them to explore and challenge the perception of the conflict.  For this team, we started with their perception of the transformation. The leaders discovered most of the dysfunction was related to the vision for the change.

The senior leadership team had created and agreed to a high-level vision and strategy to support the transformation. However, the document was written at a high level and contained abstract concepts, such as customer-centric, greater market share, and better service.

At the executive level, each leader believed they understood where the organization needed to go, making it easy for the leaders to agree to the vision. And because they all agreed to the idea and time was of the essence, the leaders didn’t question or explore each other’s interpretation, beliefs, or its meaning among the various departments.

As a result, no one noticed the slight differences in the leaders’ interpretation of the vision. That is until they started to implement. Then those tiny differences became large stumbling blocks creating conflict and stalling their change efforts.

I helped them to recreate their vision to a clear, concise, and concrete intended outcome story.

Unlike a vision statement, an intended outcome story gives you a clear and concrete picture of what the organization would look and feel like when the transformation was complete.

Through a series of guided conversations and the development of their outcome story, the leaders were able to share their ideas, gain clarity, and identify what was needed to resolve the conflict. They could imagine and experience their new organization without yet achieving it.

One of the changes they identified was to shift from telling to conversation. They asked more questions with a sense of curiosity. Leaders also reframed the way they received questions and inquiries about an idea. Instead of hearing questions as a challenge to their authority, they heard the questions as an opportunity. Receiving questions about their idea became an opportunity to explore the new idea, clarify their own thinking, understand potential barriers, and connect with their story. That’s the power of your intended outcome story.

Throughout history, leaders have used the power of storytelling to inspire, motivate, and help people achieve things they didn’t believe possible.

I would like to say creating the outcome story eliminated all the conflict among the senior team. It did not. But through their conversations, sharing their stories, and because they had a shared story to guide the transformation, the leaders were able to shift their perception. Any conflict became something that worked for them instead of against them.

They identified and committed to adopting specific new behaviours and activities that would enable them to capture the energy, diversity of thought and use the different working styles to move their organization forward. Creating and engaging people in the conversations to be part of your organization’s change stories helps people make sense of the event. When we can make sense of an event, we can reduce the fear and uncertainty. As a result, we open up the possibility for new thinking and ways of working.